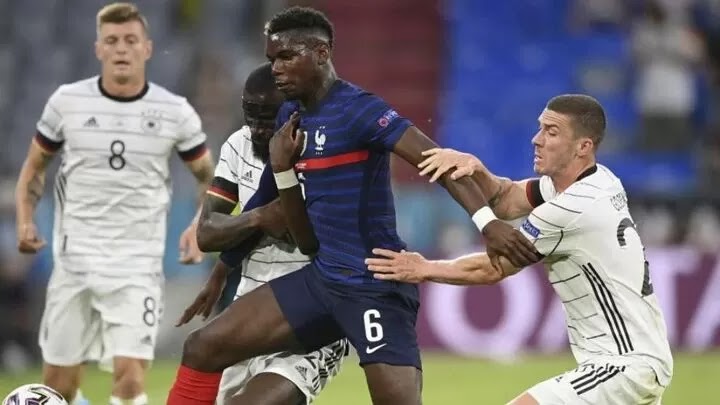 Pogba is one of Mbappe’s closest friends, and PSG sporting director Leonardo thinks that with Pogba in Paris Mbappe would be more likely to sign a new deal rather than up sticks to Real Madrid.

Pogba’s arrival would also have the benefit of making the dressing room more French-speaking rather than one that is dominated by Spanish-speaking players such as Sergio Ramos, Angel Di Maria and Neymar.

But in order for Pogba to arrive, PSG have got to sell first.

And the obvious place to start would be someone in Pogba’s position, such as Ander Herrera or Rafinha Alcantara, with the latter not in coach Mauricio Pochettino’s thoughts.

Getting rid of other midfielders would be a harder task given their respective situations.

Julian Draxler only recently signed a new three-year deal, and Danilo Pereira and Idrissa Gueye remain contracted to the club.

They could still be offloaded, however, with Pogba’s likely transfer fee of 60 million euros needing to be found.

Sales could instead be made in other positions, with Sergio Rico, Thilo Kehrer, Layvin Kurzawa and Mauro Icardi all on the fringes, and the club are willing to listen to offers.

The arrivals of Achraf Hakimi, Ramos, Georginio Wijnaldum and Gianluigi Donnarumma make it even more critical that the club shed some players.

He missed out on his dream transfer last summer to Real Madrid and a link-up with hero Zinedine Zidane, as Manchester United dug their heels in.

But now being among international teammates is a prospect that interests him, and with his agent Mino Raiola already having clients at PSG – such as Marco Verratti and Donnarumma – there are existing connections.

In spite of all the ongoing speculation, Mbappe is nonetheless expected to report for pre-season, possibly even as early as this week.

And he was still the face on the club’s second kit launch on Wednesday.

In Mbappe’s head, things don’t seem to have changed much, with the 22-year-old still intending to run down his contract and leave for Real Madrid next summer.

Given all the pressures around him, that path still promises to be a long and difficult one.