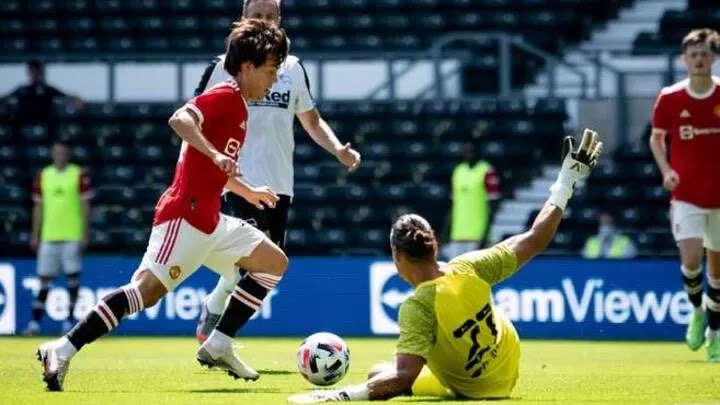 After signing for Manchester United just under a year ago, Facundo Pellistri finally made his first appearance with the first team and he marked it with an exceptional goal against Derby County.

He spent half of his debut season in England with the club’s under-21 team, whilst the second half saw him move to Alaves and help push the club away from relegation.

Heralded as one of the brightest talents to come out of Uruguayan football since the emergence of Luis Suarez and Edinson Cavani, Pellistri had been expected to make more of an impact at Old Trafford, although his goal on Sunday was well received by supporters.

“It was a run like Messi,” one fan posted.

“I don’t want to get ahead of myself, but Pellistri might just win the Ballon d’Or in the next year,” joked another.

Ole Gunnar Solskjaer took a much more measured approach to evaluating Pellistri’s performance, although he did suggest another loan move away was likely.

“It was a very good goal, very good dribbling, calm, I think he was brilliant,” Solskjaer told MUTV after the match.

“I think he showed what he is because he’s a difficult player to play against.

“I can see a loan deal for him. There’s been loads of interest and for his best interests a loan would be what we look for.”